You are here: HomenextLiving in Barton and TredworthnextMemories and HistoriesnextMemories of Widden School and Victoria Street 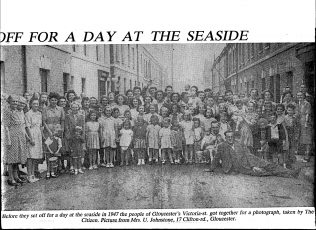 Some great memories on the site. I was born in 1944 to Pearl Simms & Edward Kelly. We lived with my mother’s mother & father at 7, Victoria Street. Still have good memories of playing in the street, the pub over the road. I have a picture taken by the Citizen of all of us heading off to Weston-super-mare sometime about when I was 4 or 5.

On the picture from Victoria street, my grandmother Gertrude Sims, is part hidden on the far left of the picture.

I am standing in front of my mother (Front row, 4th from the left),Pearl, (I am looking up & have a bucket & spade in hand).

I want to Widden infants when a very young age as my grandfather was pretty ill. Stayed there until I went to the Central School in Derby Road then to the new School at the base of Robinswood hill.

Remember my mother was great friends of Archie & Barbara Smith who owned an electrical shop on Barton street.

There was a carpet shop owned by ? who had I believe played for Gloucester at Cricket, there was a bakery in the corner that had the most marvellous tasting dripping cakes, lots of sultana’s & one or two “Drippers” had disappeared by the time I got them home. A butchers on the corner of Victoria Street had a back entrance where they slaughtered the meat, & there was a lane by the pub to a pop factory. The Co-op had a shop down Victoria Street & remember getting a bag of broken biscuits & the ration cards. There was a lady who ran the off licence on the right hand side of Victoria Street & my Nan used to get me to go with a jug for some beer & two woodbines!! So many other memories vivid in my mind. I came by accident to the site. I live now for many years in Brisbane in Australia & get back regularly to the UK. By bus, train or hire car I head for Gloucester. To get my fix of “Drippers” now I can only find them in the bread shop in the square in the centre, which I remember as the bus station & where the bus station is now was the sheep & cattle market. Watched Colonel Carne march with the glorious Gloucester’s through the cross to the Cathedral on return from the Korean war with the small cross he carved. Thank you for allowing me the opportunity to say a few words.