Can you knife a skeleton?

ValerieGeorge1
Valerie's audio interview with Tom Wilson, which forms the basis of this story 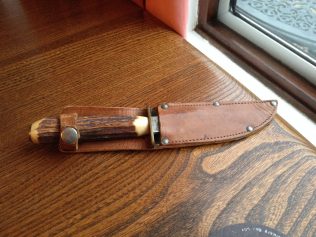 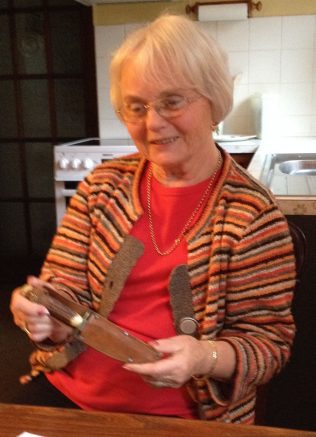 It’s a pressing question for a thirteen-year-old Girl Guide when the tents have to be put away: ‘Can you knife a skeleton?’ I’m not a violent person by any means, but taking tents into the crypt at Christ Church was not the safest thing I’ve ever done. At least, it didn’t feet all that safe to me at the time, so you can be sure I wore my dagger on my belt.

I think, if I’m honest, we spent most of our time winding each other up into giggling hysteria, as is normal for teenagers. Maybe it was a way of making that most mundane of tasks; tidying up tents, seem a bit more interesting. Maybe we were genuinely terrified of the arm bones poking out of the part rotten wooden coffins in Christ Church crypt. Its many years since I was down there, and my memory is not the best, but I know there were bones and I know I had my dagger.

I joined the Brownies almost by mistake, as the result of a long walk. We lived in Marlborough Road and I ended up a Brownie by just wandering off when my mother wasn’t looking. I went for a walk with a few other girls, just to get out really. We went for a walk all the way down Finlay Road to St Barnabas Church. They had a Brownie pack there and so we all joined, came home and told our mothers that we were Brownies now. I don’t think my mother even knew what a Brownie was, and I’m not sure she particularly cared. The only thing that bothered her was the cost of the uniform that was essential to my new hobby. Oh, and the pain of sewing on badges, although she made me do some of it. I had a badge for cooker, one for thrift, one for gymnastics and plenty of others. And you had to sew each one of them on. Made you not want to grow too much, because the idea of having to transfer all those badges to a new uniform did not bear thinking about.

But grow up I did, and I moved on. I changed schools from St James Juniors to Ripston Hall High School for Girls. And at the same time I moved on from the Brownies into the Guides. We all loved our skipper, Miss West, mainly because she had played hockey for England two years before I joined the Guides. Just talking to her about it made us dream of reaching such exalted heights. I never did of course. I enjoyed the game for the games sake, but that was about as far as I went with hockey.

The Guides were based in a hut in the car park opposite the Technical College on Brunswick Road and we stored our camping equipment in the crypt at Christ Church. It being a crypt, that’s also where they kept the coffins, and one or two of the cheaper, wooden, ones had started to decay and so there was the occasional toe or finger bone poking out. Enough to make thirteen year old girls screech, clutch each other, and the brave ones reach for their daggers for reassurance.

Can you imagine it now, a thirteen-year-old Girl Guide with a four-inch knife proudly strapped to her belt marching through the middle of Gloucester? We did it then, even if you would never dream of doing it now. I got mine after two weeks of Welsh rain in Pwllheli. I can still remember two weeks in bell tents, rolling the bottoms up every day to let the air in, come rain or rain (it never did shine). Climbing through the woods, cooking on an open fire, trying to dam a stream, it was all marvelous fun. And at the end, Miss West presented me with what I can only describe as a wicked dagger in a leather sheath, with ‘Good Camping 1949’ written on the back. It was good camping, and it was a good weapon to have just in case any of those skeletons tried to stir when we put the tents away in the crypt again.