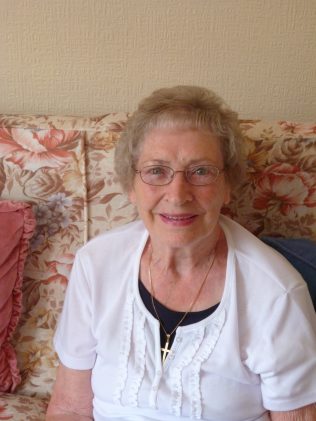 Joan Jackson 4
Joan remembers Barton Fair, another fair on Wildman's Ground, and a moving story of her grandfather's persistence at one of the fairground games.

Joan Jackson 6
Joan remembers shopping in Barton Street, the shops' wooden counters, everything being weighed out, and butter and cheese being stamped.

Joan Jackson 7
Remembers their home in Blenheim Road being visited by a poor man selling firewood with his daughter who had consumption (tuberculosis).

Residents of Blenheim Road felt that the road was so called because of the old Blenheim apple trees that grew in some of the road’s gardens.

Joan remembers attending Hatherley Road Infants’ School, aged 4, and her experiences there until she left for St James’ school aged 6.  In particular, she recalls a lesson where they had to place dried beans around pictures of animals to make their outlines.  An example of this kind of lesson can be seen on one of the scrolling images on our homepage.

Joan left Hatherley Road when she was 6 and clips 2 and 3 recount her experiences there.  These include a visit by the Nit Nurse and the discipline at the school.

In the remaining clips, Joan remembers what life was like in the area, the fairs, shopping, and its poor.

One of the most revealing clips is Joan’s reminiscence concerning the gas street lighting.  She remembers the lamplighter coming to light the street lamps at dusk.  In the 30s they were gas not electric.  Neither does she remember having clocks in her house.  So, when the lamplighter came to put the street lamps out in the morning, he would knock on the bedroom window to wake them up.