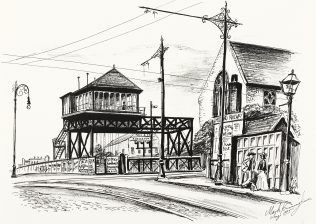 A loud blast of the whistle warned us that the mail train was passing Barton Gate. As if we needed the warning – the house had already started to shake a little bit, as it always did when the trains thundered past. Momma would never hang the washing out the front. Too much soot and if the embers flew far enough, you could have scorch marks on your sheets. But I loved the trains. Whenever it was quiet, whenever I was bored, I’d press my face against the front window, nose flattened to a pig’s snout, waiting for the next engine to pass.

I can still remember hearing the crash and bang when that train came off the rails. It screeched across the road towards the Prince Arthur pub. There were sparks coming from the wheels. I didn’t know that really happened – I thought it was an effect in the pictures. But that engine sparked all right. Sparked a great big problem as well. It was too heavy to shift using the crane they had in Gloucester, so a bigger one had to come, all the way from Manchester Daddy said, just to right that train. I had no idea where this Manchester was, but Daddy said it was several hours north and they had a docks there, a football team and it was a great city. It had a canal, just like Gloucester, so I felt it was somehow like where we lived. I knew there was a Manchester back home in Jamaica as well, and at first I thought the crane had come from there. Daddy told me not to be so silly. Any crane in Jamaica would have been sent there from Britain, so why would they want to send it back? I said I had no idea, but I wanted to go and see the crane at work, lifting that great up-ended beetle of a train, setting it free to glide powerfully along the rails again, freed and helpless no more. Even though I’m a girl and Daddy says working on the railways is a man’s job, I really loved watching trains.

I liked the mail train as well. The blur of red carriages and the fantasy that maybe I would see someone sorting the card I’d sent to Nana back in Jamaica. On the rare occasions when I’d posted something, I always made sure I watched out for that train. Never saw anyone sorting anything mind you, but I still wanted to see my card making its way to London and then across the world. The only downside to the mail train was bedtime. We didn’t need a clock or alarm or anything. The mail train was bedtime, around 8pm every day except Sunday. If we had wanted supper, we’d better be already eating it by the time the mail trail whistled, or we would go to bed hungry.

That Friday I’d already had a patty, and so I didn’t mind the whistle goodnight at all. In fact, I welcomed it. The next day was Saturday, and Mrs. Humphries was taking us on a special outing. All the children from All Saints Sunday School were allowed to go. 9am sharp, ready and willing to go ‘up in the hills’ as Momma always called it. I loved going up Robinswood Hill with Mrs. Humphries and my friends from Sunday School. It was nice to get out of the city. Lessons at Widden were not my favourite way of spending the day. A chance to run and talk with Gladys was much more interesting.

To be honest, even a Sunday service with Reverend Humphries would be preferable to mathematics with Mr. Davis. I found his Welsh accent hard to understand, and that’s why I sometimes got my sums wrong. It wasn’t that I was a ‘stupid black girl,’ as he called me on more than one occasion. Reverend Humphries was coloured, just like me, and seeing him standing at the front of All Saints at 10:30 on a Sunday morning made me wonder and dream. Would I be able to do that one day? Daddy said that being a priest was a man’s job, but then Daddy always says doing anything is a man’s job, except for cleaning or washing or cooking. Momma said that right now I could not be a reverend, but maybe the day would come when I could. ‘You just keep dreaming and praying, treasure,’ she said to me as she tucked me in one Sunday night. ‘One day the good Lord may make it so.’

Walking to church on a Sunday was great fun. It wasn’t far at all. Just across Bartongate. And since no trains run on a Sunday, we don’t have to go through the subway, we can stay above ground. And that man at the gates is not at work on a Sunday. I’m sure he plays with the gates sometimes, making it move a foot or two, to make people jump or panic and rush across. He seems to do it to see if he can make grown men jump or schoolgirls squeal and run. Never does it to the pretty ladies, so when I’m crossing, I always try and walk close to one of them.

But tomorrow we won’t be going to church, and we won’t be dodging the gates. Gladys and I will be up in the hills with Mrs. Humphries. The weather should be fine, Momma says. The mail train’s whistled goodnight, and I’m off to bed. I want to be up good and early and ready to go in the morning.