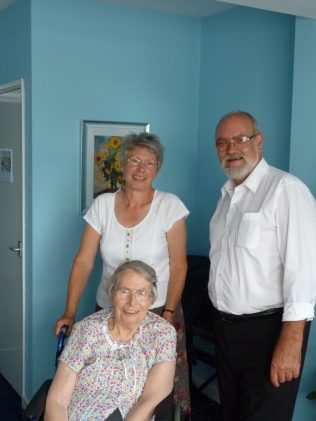 Margaret, Vivian, & Tony 2
Viv names the 5 butchers that used to be on Tredworth High Street and the type of butchery they specialised in.

Margaret, Vivian, & Tony 4
Memories of the smells of the shops in Tredworth in the 1940s.

Margaret, her daughter, and their friend Tony recall the shops that used to be in Tredworth and on the High Street from the 1940s onwards.

Viv remembers the character of the people who used to run Long’s Sweet Shop and how their sweets kept in jars before being weighed, sold, and placed in white paper bags.

She goes on to recall the number of businesses that used to be on Tredworth High Street, and the particular smell that the shops gave to the area. The smell of fresh bread is one she remembers in particular because she lived next door to the bakers.

In the final clip, mother and daughter recall the local delicacy that was elvers. A pint of these baby eels, caught in the river Severn, could be bought for two pence.