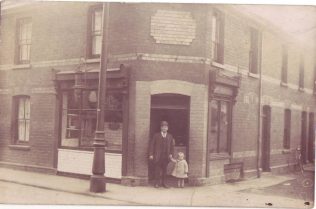 The attached photograph of the shop now owned by Rod Tandy was taken in the early 20th century (I think) – it was a Fish shop then run by my great Grandfather Henry Lewis (I think it is him in the photograph).

His son (my Great Uncle) Joseph Henry Edwin Lewis died on 1st October 1918 of influenza while on basic training before joining the RAF. I have a
certificate of gratitude for his sacrifice in the war, from the city of Gloucester and signed by the Mayor – J Roberts. it is in a frame and on the
back is the framers label – C.W. Higgins, Picture Framer & Mount Cutter, 180
Barton St Gloucester – next door to Mr Tandy, I guess.

You can view a larger version of the image by clicking on it.