You are here: HomenextWorking in Barton and TredworthnextMemories of the Barton Street swimming baths in the 1950s

Memories of the Barton Street swimming baths in the 1950s 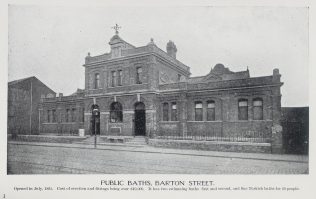 I worked at the Gloucester baths in the 1950s.  There were two swimming pools in the main building and a much smaller one in the Turkish bath part.  The Turkish bath was quiet and apart and really very nice as I remember, there were it seems to me about seven hot rooms and steam rooms also of course the small pool and a large resting room with beds always kept very clean with fresh linen.

People would come first thing in the morning and spend several hours in the steam and hot rooms and then showered and rested and sometimes napped in this large room and were served tea and toast if desired.  There were probably about ten cubicles for changing where people could leave their possessions.  And always a good supply of clean towels.  This was quite a private area and the staff always had to be aware of which day it was because there were mens and womens days.  We had two lady masseuses and one male masseur and once in a while someone would forget and we usually had a good laugh when that happened….  There was also a laundry in the back upstairs which also laundered sheets and towels for several businesses in Gloucester.  It was very hot in there and I was always happy to go back there in the cold winter mornings.

On both sides of the front entrance there were slipper baths about 10 or so each side I think and this was quite a busy place since many men who worked at the foundry and the railway would come in every evening to bathe before going home, I am sure their wives were very happy, the men obviously were very sooty and many of them would not get on the bus to go home until they cleaned up.  There were two older men who worked in this area and they were funny and were very tolerant of us young folk who worked in the office and cashier booth.

There was always an attendant in the pool areas and more on the busy days.  The local schools came in regularly and also soldiers from Gloucester barracks, on those days if I had to go to the back from the office to the laundry I used to go down into the basement where all the pipes and stuff were, to get to the laundry.  I  didn’t much like it but was too self conscious to walk through the pool with all the soldiers.  The pool staff were all properly trained and we also had swimming instructors who were fully qualified, I remember one lady had actually swum the channel.  I think she emigrated to Australia.  I especially remember the man who took excellent care of the workings, a lady once lost a diamond out of her engagement ring while swimming and he actually found it in the filters, a very conscientious man who was very highly regarded.

When I first started working there, the baths superintendent was a man named Lusher and a little while after, he left for a position in Warrington and the new man was called Thorne who I believe was a Navy man,very very proud to be British (perhaps that’s where I got it from).

In the winter one of the pools was covered up and I think it was hired out for racquet games or something like that, and there were billiard tournaments held there with famous players. However, the most exciting times were the wrestling matches held regularly, they were very colourful characters and at first I was rather afraid of them, they were so unusual looking, but after a while I grew more comfortable especially after one of them explained to me that it was only SHOW BUSINESS and they were quite ordinary fellows really.

I remember we had a swimmer who came in every day to train, not sure if he was in the Olympics or was training for the Olympics, he had quite a following and something of a celebrity –  seems to me his name was Geoffrey.

I think the baths were very well run and I enjoyed my time there, sometimes the mayor and other officials would visit and I think even Sir George Dowty came for some reason.

The photograph of the Baths was taken in about 1900, and you can find a brief history of them here.