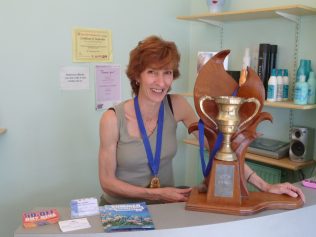 Lesley 1
Lesley introduces herself and the places around Barton Street where she was born and where she began work as a teenager in the 1970s.

Lesley 2
Lesley says that she was 16 years old when she "officially" began working at her mother's hair salon on Barton Street and that being a "natural born hairdresser" has been "engrained" in her. She goes on to remember her husband, John Phelps, who won the World Hairdressing Championships in 1990, and who was very happy and popular with the locals of Barton when he worked there.

Lesley 3
One of Lesley's long-time customers recalls that she has been coming to the salon for 58 years before Lesley goes on to explain some of the reasons why she has such a "loyal" group of customers who are like a family to her. 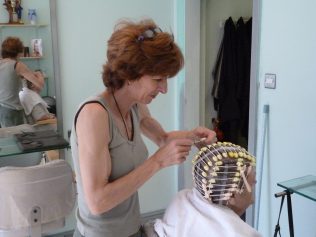 Lesley was born in Regent Street, in Tredworth, in the 1960s. Her mother, a hairdresser, owned a salon at 157 Barton Street and, as a baby, Lesley would sit in her pram while her mother worked.

When she was 16, Lesley began to work “officially” at her mother’s salon. In this interview, she remembers her mother’s salon and reflects on how hairdressing had been “engrained” in her from a young age to make her the “natural born hairdresser” she is today.

In the second clip, she remembers her husband, John Phelps, who won the World Hairdressing Championships in 1990. During his time working in John Phelps Hair Academy on Barton Street, the salon that he founded, she recalls how happy and popular he was with the locals.

In the final clip, Lesley explains some of the reasons why she has such a loyal group of customers and reflects on Barton’s strong community spirit: “We don’t make a lot of money anymore,” she says, “but we’re happy to be a little community.”

Lesley’s story is one of those represented by Gloucester Theatre Company in their play about the lives of Barton and Tredworth people. If you would like to see the theatre piece, performed at The Picturedrome on 25 February 2012, then click here.