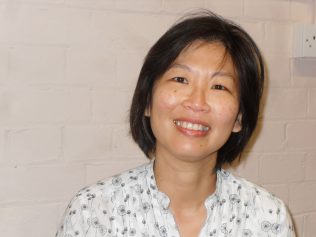 Fiona 4
Fiona describes the "invisible infrastructure" that goes on behind the scenes in the area and how much time people put into building a sense of community, the importance of this, and of "passing something between the generations"

Fiona 5
Fiona recalls one really special moment whilst making the recordings and the "sense of heritage" felt when contributing to the recordings
Indonesian Song (Bengawan Solo)
Fiona sings the song her Grandfather taught her, mentioned in clip 5 above. "Bengawan Solo" is a song about a river in Indonesia.

In 2009, Fiona Kam Meadley was commissioned by Artshape to take up a six-month position as Artist in Residence at GARAS (Gloucestershire Action for Refugees and Asylum Seekers).  During her time there, she completed a project called “The Barton Street Recordings”.  The project recorded the traditional songs, poems, and stories of people in the street in the languages spoken there.

Fiona goes on to describe how she went about collecting the recordings, the pride felt by those who took part in them, both young and old, and observing the time and effort people in Barton and Tredworth put into building a sense of community there.

In the final clip, she remembers how it felt to record a song her Grandfather taught her:

“It’s incredibly emotional because suddenly you go back into your own life and you remember the people who taught you this song, a real sense of – ‘heritage’ is not the right word – of being handed down something, and that, actually after all these years and being thousands of miles away, that you actually still remember it, and find that it’s there, part of who you are.”

Here you can listen to more of “The Barton Street Recordings”.

“The Barton Street Recordings” were part of Artshape’s “Proud to be Different” Project.  Here you can learn more about Artshape.