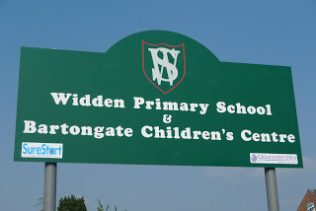 These notes were compiled by Ollie Taylor in preparation for the 25th anniversary celebrations of Widden School on its current site in April 2011.

Widden Street School was the first new school built by Gloucester School Board and was situated in the centre of a “popular and increasing neighbourhood” to provide for children in the Lower Barton Street area.  Thirteen architects submitted plans for the building but Medland and Sons’ design was accepted because it “combined efficiency with economy”.  This comprised of two separate buildings: a two-story block, with the infants on the ground floor and the Girls’ Department above, plus a detached block for the boys.  The builder was James Clutterbuck and construction involved red bricks and Bath stone dressing.  The total cost was £4414, which was raised by a 50-year loan from the Public Works Commission.

The school opened on the 24th of October 1878 and was initially staffed by three headteachers, assisted by young pupil teachers.  Each department had a large schoolroom adjacent to two classrooms.  They were linked by doors with clear glass windows so that the headteacher of each department could supervise their staff and pupils, while pupil-teachers could take groups into the classrooms when necessary.  Pupil numbers increased rapidly and by 1885 both the Boys’ and the Girls’ Departments had up to 230 children each in spaces that were designed for 200.  Overcrowding would prove to be a persistent problem for Widden Street School throughout the late nineteenth- and early twentieth-century until the opening of Derby Road School in 1907.

Progress and Tragedy: the 1890s

During the 1890s, the school made good progress, adding extra classrooms at a cost of almost £600.  The school could now accommodate 250 boys, 250 girls, and 300 infants.  However, in 1896, a smallpox epidemic closed the school from February to July, killing 21 children from the Infants’ Department alone.

During the First World War, two masters and over 50 Old Boys lost their lives: a War Memorial was built to commemorate them.  In 1916, Sergeant Harold Webb, an Old Boy, was awarded the Distinguished Conduct Medal (a medal awarded for bravery in the field) and the school was given a half-day holiday as a celebration.  Numbers dropped in the years after the war and the Education Committee considered closing the school and transferring the pupils to Derby Road.  However, in 1925, Derby Road Boys’ and Girls’ Departments became 11–15 Central Schools and children leaving Derby Road Infant School were transferred to Widden Street, making its existence viable.

Reorganization and Improvement: the 1920s and 30s

In this time, the buildings were steadily improved.  Electric lighting (instead of gas lighting) was installed in 1925 and central heating (instead of a stove in each room) in 1927.  When Gloucester schools were reorganized in 1931, Widden Street ceased to be an all-age school.  The 7–14 Boys’ and Girls’ Departments were reorganized as a single mixed-sex school for 7–11 year olds.  Older pupils were transferred, mainly to Hatherley Road School.  The junior school occupied the two-story building that formerly belonged to the Girls’ and Infants’ Departments.  The Infant School continued, but moved into the separate single-story building, formerly used by the Boys’.

During the Second World War, the buildings were damaged in an Air Raid on the 6th of January 1941.  The school was closed to children for about four months: the juniors were sent to half-day classes at St. James’ and the infants to Derby Road for the same.  Free school milk began to be provided from 1942 and school dinners from 1943.

Innovation and Royal Recognition: the 1960s and 70s

In the 1960s, classes at Widden Street reflected the growth in the local Asian community, and in 1971 a Language Centre was built next to the school.  In 1976, the Widden Family Unit opened next to the school to cater for mothers and pre-school children and to house the Reception Class of the Infant School.  As a result of these innovations, Mrs R Thomas, Head of Infants between 1964–78, was awarded a Silver Jubilee Medal by the Queen in 1977.

In 1985, the Junior and Infant Schools merged to form Widden County Primary School, and in early 1986 moved to new buildings nearby in Sinope Street.  The new premises were opened by the Queen on the 14th of April 1986.  At this time, the school had around 250 pupils in eight classes.  The Family Centre for pre-school children continued to be part of the new school.  The old school buildings subsequently housed an Islamic Secondary School for Girls.

This document was created using material in the Gloucestershire Archives, including:

School Files and Minutes of Gloucester School Board and the City Education Committee.