Get me to the church on time

GwynethJeffries1
Gwyneth recalls her marriage blessing and making her own dress 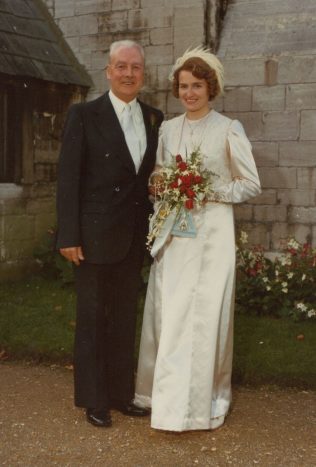 Where is that car? Where is it? I’ve never been late for anything. I’m always punctual. Mother taught me, God rest her soul, to always be on time, and it would be awful to be late for my own wedding day.

There were butterflies in my stomach and ants in my shoes. I couldn’t stand still as I waited for the car to turn up. I know we’d booked it, I can remember ‘Jeff’ explaining very clearly to the receptionist what we wanted. ‘Yes, first take Gwyneth from Alexandra Road to the Registry Office, then both of us to St James Church and finally on to the Fleece Hotel for our Reception.’

‘Certainly sir. I hope the sun is shining for you.’ She smiled as she wrote all the instructions down.

But where were they?

Would all that sewing be for nothing? ‘Uncle’ Tom had spent hours carefully cutting out the pattern for me, and I’d spent many an evening sewing. I was so pleased with my dress. The thrifty part of me was especially proud that my fascinator was more expensive than my dress, and that it had only cost me eight pounds. The creative part of me was thrilled that I had managed to make it all myself. ‘Uncle’ Tom had been so kind to my mother, giving her some extra work after my parents separated. He’d been so good to us both, and this one act of kindness in helping me make my wedding dress really topped it all. The vain part of me (and there’s a part in everyone) was thrilled with how I looked. I felt beautiful and everyone told me I looked lovely. I even believed them, which made it worth all that effort.

But without the wedding car, would anyone see me? Those butterflies kept jumping in my stomach, and the ants in my shoes wouldn’t let me stand still. I was pacing round the room.

‘Stop the circling sis, you’re making me dizzy.’ As always, my brother Bob had a calming word for me. ‘Don’t worry about the car. I’ll take you together with the girls. You’ll all fit in. I know there won’t be a ribbon on the car, but at least you’ll get there.’

So that’s what we did. I squeezed in with my bridesmaids, and we made it, just about, only five minutes late. The official taking the ceremony said five minutes late was good. It meant everyone was seated ready for us by the time we arrived. And after we came out of the Registry Office, there was the car. But I never any some ribbons, which I still regret to this day. On the postiive side, we did not get a bill, which kind of compensated for the first disappointing ribbon-less ride to the Registry.

Reverend Stewart was waiting for us, smiling and happy for us both as he took the ceremony of blessing. To be honest, I was only half listening. My head was whirling. Could it really be less than eighteen months since I met ‘Jeff’?

I always went to the Three Counties Show. For fun more than for work, although since I did manage a small holding there was a bit of a professional interest. It was nice to learn what other people were doing and see if there were any good ideas I could copy. I did not have any spare money, certainly not to spend on electrical massage equipment. But there was something about the man at the stand that made me stop. He wanted to give me a demonstration of his wares. I told him he was more than welcome to but added ‘I won’t buy anything.’ He just smiled and somehow sold himself to me at that meeting.

Everything changed after that chance encounter. I was working in the Parks Department at the time we met, but not long after that I became an ambulance driver, which I really enjoyed, helping vulnerable people to their appointments at the hospital and so forth. I was the first woman ambulance driver in Gloucester to get married, and it even made the paper. I’ve still got the cutting to this day. I’ve always done my best to be punctual, and generally drive myself these days. That way I know the car will be there when I want it. Throughout all my years on the ambulances I always made it to where I was supposed to be. I hope I never gave anyone ants in their shoes or butterflies in their stomach. I may have done, but it was never intentional. And I always tried my hardest to get everyone to the hospital and to home on time.