The personnel at the bakery

Personnel at Sparkes' in the 1960s
Phil recalls the members of the family who helped Ken run the bakery.

How Sparkes' Bakery personnel dressed
Phil describes how those who worked in the bakery were expected to present themselves.

The character of Ken Sparkes
Phil recalls that his uncle was "quite a character". 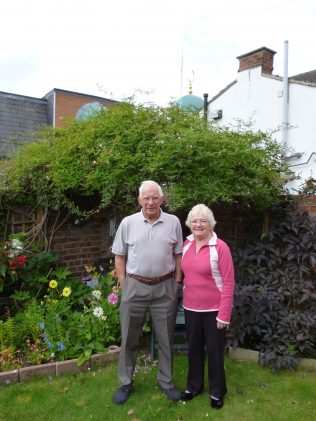 Marlene remembers working at the bakery on a Saturday as a girl
Marlene recalls that Phyllis and Ken Sparkes were both "very fond of children" and being employed by them.

Phil Sparkes, the nephew of Ken Sparkes, remembers some of the personnel and dress of the bakery staff in the 1960s.

Although Ken was the main baker, his brother, Bill, helped him with the baking until his death in 1967.  Bill’s children, Kathleen and Peter, also lent a hand; his daughter would help with the preparation.  After Bill’s death, Ken’s wife, Phyllis, helped with the day to day running with the bakery.

Although before the days of health and safety as we know it today, Ken expected the staff who worked in his bakery to dress in a certain way.  Full length overalls would be worn to protect clothes, workers, and the bread.  They also helped to give an air of professionalism.  Ken Sparkes also liked his staff to wear something on their heads to protect the bread.

Phil recalls that his uncle was “quite a character”.  He was always “clowning” and ready to crack a joke early in the morning.  “This was the thing that helped him get through actually,” reflects Phil, “he had a good sense of humour”.

One of his favourite pranks was with the large, metal trays that were stacked up outside the bakery outside the kitchen.  These trays, used for baking, were 3 feet wide and 6 feet long.  When one of the staff would come out of the kitchen to wash their hands, Ken would sneak out behind them, grab one of the trays, and drop it onto the concrete floor behind them.  It would make such a crash and they would “jump out of their skin”!  They couldn’t help but see the funny side though.

“On ordinary days, he was a fun character,” remembered Phil, “although he had a very hard life.  I suppose it was a diversion from what life really was at that time.  He always had a joke or two to crack.  It made things much more pleasant.”