The building, business, and breadround 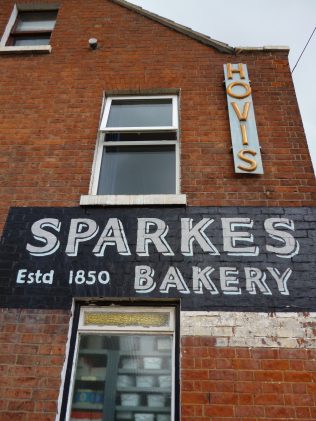 The layout of the building on Ryecroft Street
Phil Sparkes, the nephew of Ken Sparkes, gives a detailed description of the bakery.

Description of a typical day in the bakery
Phil remembers his uncle Ken beginning work at 5 a.m. to stoke up the bakery's steam ovens and working through til 9 p.m., 6 days a week.

The smells of the bakery
Phil remembers the smell of fresh bread, fresh yeast, and hot cross buns which had their own particular aroma.

Sparkes as a general grocer
Phil describes the variety of products sold in the shop during the 1960s, and explains that the trade in baked goods was mainly at the start of the day.

A typical Saturday bread round in 1963
Phil gives a detailed description of working on a bread round, a job which would begin at 8 a.m. and end around 7 p.m.

Money bags, floats, and book-keeping
Phil recalls the things that they would need to carry with them on the bread round.

How many clients did Sparkes' deliver to on a Saturday?
Phil remembers delivering to 20 to 30 businesses in the morning then between 200 and 300 residential customers in the afternoon.

Phil Sparkes, the nephew of Ken Sparkes, gives a detailed description of the premises on Ryecroft Street.

He remembers entering the property through the yard at the back, where the delivery vans would be parked.  Most people came to this entrance through the back yard, if they knew Ken Sparkes well.  Or, if they wanted to collect some goods from the bakery they would usually go to the bakery door.  The front door of the property would rarely be used.

The back garden was “a little bit neglected due to too much work” and lounge not really used except for special occasions.  Dining room was where they cashed up the money when the business was closed.

“It was laid out as an ordinary house,” recalls Phil, “but you had all this business going on around you.”

Another fascinating recollection is of the very steep steps on the left as one entered the yard, which went up to the loft where the flour and dried fruits were kept.  Ken carried these heavy bags of flour up to the loft on his back.  There was a chute from the loft down which flour and other ingredients would be poured into a huge mixer.

Phil remembers his uncle Ken having to get up at 5 a.m. to stoke the steam ovens with coal.  During the summer the temperature in the bakery could reach 100 degrees farenheit (38 degrees centigrade).  He would work in the until about 9 p.m., 6 days a week.  Occasionally, on Sundays, he would work on a wedding cake.  These decorations were his pride and joy.  He would do the work on these in the loft, where the flour was kept.

Although Sparkes’ Bakery is remembered primarily for its dripping cakes and baked goods, Phil reminds us that the shop was, in fact, a general grocery as well.

The shop would sell household produccts, sweets, and tobacco, as well as the breads and cakes for which it is remembered.  The shop would open from 9 a.m. until 5.30 p.m., with no lunch hour.

As a 13 or 14 year old boy, Phil worked on the bread delivery round in 1963.  He would arrive at the bakery at 8 a.m. to load the van, a task which took about an hour.  Bread would be arranged on wooden trays and baskets for the bread would be loaded for the doorstep deliveries.

Their first deliveries would then be to businesses who wanted to resell the bread.  This took about an hour and they would then return to the bakery to reload the can with breads and other goods to deliver to the doorsteps of private and residential customers in the afternoon.

The products sold in the afternoon would include more fancy cakes (about a dozen varieties), transported in cardboard boxes.  Fruit and currant loaves were also sold, as well as the early stages of sliced bread.  Only medium or thin slice would be available then; there was no thick sliced in those days.

Their route would begin in the centre of Gloucester and would end in Hucclecote at approximately 7 p.m.  By the time they had returned to the bakery and unloaded the van, the young Phil would have worked a good 12 hour day.