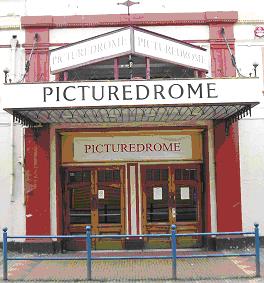 zoom
The front of the Theatre Before Renovation
MJParker 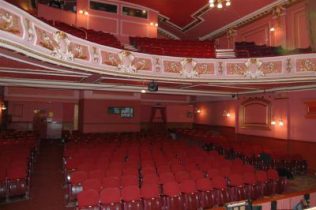 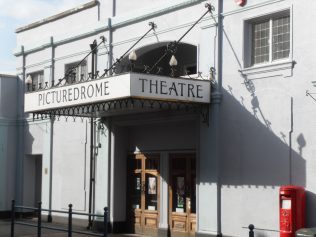 Since the New Olympus Theatre, now called The Picturedrome Theatre, on Barton Street was sold to two local businessmen, Ash Chavda and Babu Odedra, work has started on bringing the building back to its former glory.

From the outset, they were determined to keep The Picturedrome as an entertainment venue, and have unveiled their plans to restore the 1920s picture house to its former glory. Work has already been completed on the Studio and lounge bar areas. The Studio has been transformed into into a multi-purpose facility which can accommodate everything from dance classes to conferences.  The lounge bar has been refurbished with new furniture, décor, and carpeting, making it an inviting and accomodating space for refreshments during the interval.  Work is now under way on the stage.

After this, the next target of the renovation is the auditorium itself.  Here, the ornate mouldings will be repaired, the ceiling painted, and the old film projection box removed.  Once functioning at full capacity, The Picturedrome will have evolved into a multi-purpose facility accessible to everyone.

Before being bought by Ash and Babu, The Picturedrome Theatre was owned by the Gloucestershire Operatic and Dramatic Society (GODS), who called it The New Olympus Theatre after moving there from their old home The Olympus Theatre. Mounting maintenance costs led to the theatre being put up for sale and residents and performers feared that this historic building would be converted into flats.

Originally called “Palmer’s Picturedrome”, the building opened as a cinema on Monday 15th January 1923, with seating for 700 people. On the opening day, a film called “Fascination”, starring Mae Murray, was screened.  The programme on that day also included the Pathe Gazette and a full orchestra, which played at every performance.

The theatre is now in working order and in early July 2009 had its first performance by The King’s School, which was a great success.  They came back that September with “A Midsummer Night’s Dream”, followed by “The Tempest”.  In 2011, they are planning to stage “Joseph and his Amazing Technicolour Dream Coat”. Mr Chavda said, “we are very excited about the project and we are raring to go. We started looking for some commercial premises that could be turned into something for the community and when we found the theatre we decided it should be something for all the people of Gloucester.”

“We never wanted to turn it into flats”, said Babu Odedra, “and always knew we would restore it as a theatre. We want to bring it back to life.”

The Addition of The Gloucester Theatre Community Interest Company has brought even more to The Picturedrome. Their first production of “A Lion, A Witch and A Wardrobe” was a great success, and this has been followed by “Zunandule” and “The Secret Garden”. Their most recent production, “Bugsy Malone”, with a cast of 48, aged between 11 to 16, was also received with much acclaim.