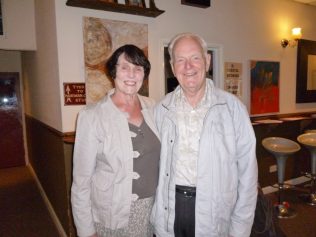 John Picturedrome 1
John remembers the house that existed on the site before Mr Palmer established The Picturedrome and recalls how it was possible to get to see films without paying.

John Picturedrome 2
John remembers cinemas first opening on Sundays and being turned away from the first show for being too young. He also reflects on the number of cinemas in Gloucester and the content of a typical show at the time when he was growing up.

John Picturedrome 3
John remembers watching westerns and "The Hunchback of Notre Dame" at The Picturedrome in the late 1930s.

John was born and grew up in Vauxhall Road, where his parents were landlords of the Trevor Arms, opposite Sparkes’ Bakery.  His father owned shares in The Picturedrome and John was a frequent visitor in the 1930s.  John is a born entertainer and his memories are recounted with great humour.

This photograph was taken in the Picturedrome in June 2011 with his wife Jeannette.

You can find more of John’s memories here and here.