These memories were submitted by Jean Young, nee Bircher, and refer largely to Bircher’s grocers.  The photographs were also provided by Jean.

I was born at 294 Barton Street. My father had a grocery shop and we lived behind the shop – my mother, father and my brother Roy. We had a happy life there – Barton Street was a friendly neighbourhood, everyone helped everyone. 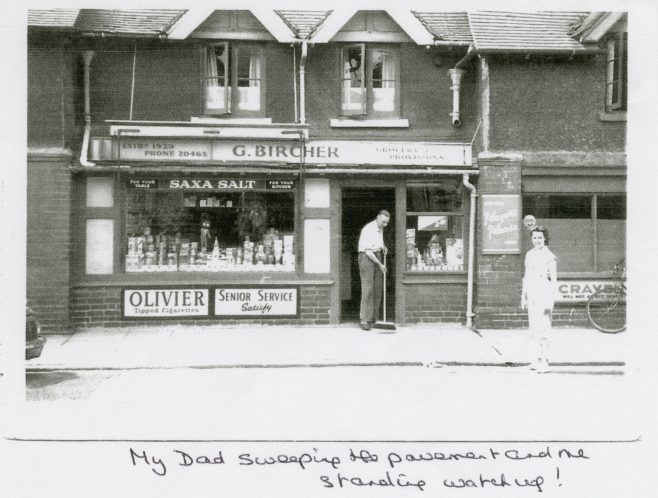 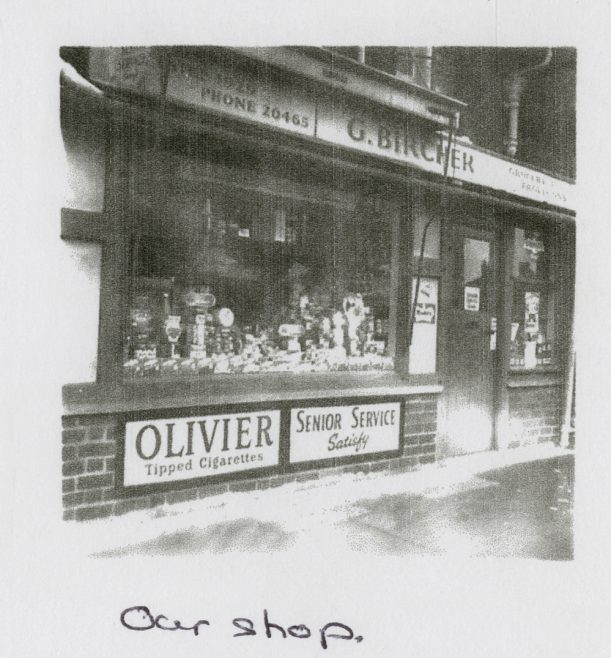 When war was declared I remember my father and neighbours wheelbarrowing sand from across the road from a builder’s yard – I got a ride in the barrow! I think they used it to fill sand bags.

My father always said that he was the first ‘takeaway’ in Gloucester as he used to make faggots and customers brought their bowls in and dad filled them with faggots and peas for them to collect! 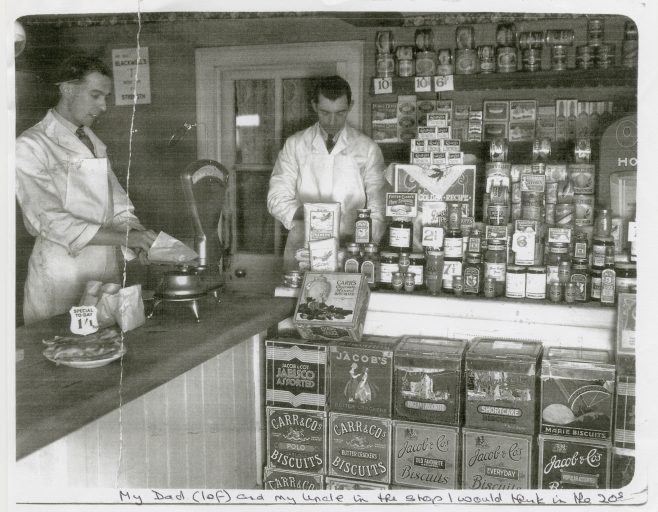 I remember one day we were out in our garden and mum said “look at all the birds around that plane,” and dad said “that’s not birds – it’s bombs!” With that, we all ran into the house and got into the pantry under the stairs. When the bombs dropped all the saucepans fell off the shelves. I think during this raid the bombs dropped around Millbrook Street and one fell on a house in Barton Street where my little friend lived. She was killed along with her mother and gran. The father came home to find his house wrecked. He came into the room behind the shop and I was sent to a neighbour’s house at 298.

We used to get our coal and milk delivered by horse and cart. I remember the milk being ladled out from big churns into a jug.

Mr Stevens who ran a greengrocers on the opposite side of the road to our shop, delivered his orders by horse and cart. The horse was stabled in a yard where Smith & Choyce’s factory is now.

In a map I have, I noticed that in 1906 the ground adjoining Hatfield Road was all allotments, and also on the opposite side of the road next to Chequers Bridge there were allotments too. According to this map the area at the Junction of India Road and Barton Street was known as ‘World’s End.’

There was a cholera outbreak around Barton and Tredworth and a house was bought to act as a temporary hospital in 1832 and is now known the Gothic Cottages, just East of Sinope Street.

We are grateful to Jean for supplying these memories and images.  If you have memories of Bircher’s, or of the other things that Jean mentions, then why not add a comment below?